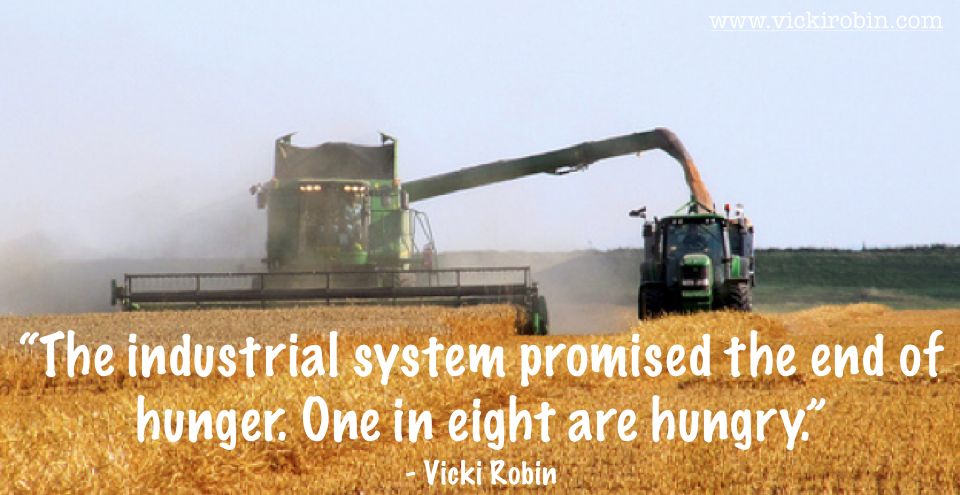 In 1991 Ted Turner (billionaire founder CNN and passionate champion of the environment) awarded Daniel Quinn‘s Ishmael the Turner Tomorrow Fellowship, a prize honoring fiction that produces creative and positive solutions to global problems.  In it he introduces, through the unlikely character of an ape in captivity, his central thesis of the tyranny of agriculture. Humanity’s left turn was the domination of nature through concentrated agriculture that allowed a ruling class able to lock up/control the food supply of the common people.

Control food, control people? Wow. Being practical, I saw his point but wondered how we get from here (at that point just 5 billion) and hunter/gatherer/new tribalism he said would be our salvation.

My approach for the next decade of culture change focused not on agriculture but consumerism as the core issue. More is not better. Stuff is not happiness. Your job is not your identity. The earth has enough for every man’s (sic) need but not enough for every man’s greed, as Gandhi said. Fifteen years later, though, it became clear that this consciousness of greed, when applied to food, produced both obesity and famine, and that finding viable alternatives to the corporate industrial growth economy as applied to food would be critical. Enter a focus on local food – and now the 10-Day Local Food Challenge

The Challenge is an invitation to explore the viability and possibility of local food systems that can feed their people – at least 50% of their daily needs. In this and future blog posts I’ll circle this question from multiple angles. Research that says it is possible. Research that says it isn’t. Stories that inspire. Critiques we must attend to. The dominant system dynamics. Economic and political barriers to make changes that make sense. What tools are crucial to feed the world, and what are convenient fictions propagated by what Quinn calls “Mother Culture.”

I assume I am not alone in these questions. I assume you and thousands of other food system game changers are on the hunt for such answers. Join me in the quest. Comment. Post this to Facebook. Write your own posts and articles.

In this context, I revisited Daniel Quinn 25 years later. After all, gathering and hunting and foraging are local food solutions. I found this summary of this thinking that I will quote from here with commentary, recommending you read the whole piece.

They start by asserting that the story of the Agricultural Revolution as a one time and all at once break-through for humanity is not true.

“This myth has permeated our culture since the 19th century thinkers created it to support their idea that civilization is the divine destiny of mankind. However…Agriculture is not unique to civilization. What is unique to civilization is a particular form of agriculture, that Daniel Quinn terms totalitarian agriculture [which]… subordinates all life forms to the relentless single minded production of human food. It is the belief that the whole world is ours by right and we should turn all of the land into human food.”

Isn’t this just what advocates for “there is no alternative” “we need industrial agriculture to feed the world” assert?

The results of this assumption are many:

I find this next quote very powerful:

“The agricultural revolution wasn’t about humans finding a better way to live. It was about a single culture out of thousands beginning to live in a way that only worked through exponential growth. …. It wasn’t a revolution; it was an experiment that became a runaway train.”

I think many attracted to the 10-Day Local Food Challenge are consciously or unconsciously reacting to the sense our food system is a “runaway train” and that there has to be a better way. Is sourcing our food locally a step in the right direction – if not back to tribalism at least forward to community resilience? If so, how local can we go?